In total, 3 TWh of electricity was generated from renewable energy sources in 2021. According to estimates by the Lithuanian Wind Energy Association, wind accounted for 45.6% of all green electricity generation in Lithuania last year (including the Kruonis HPP). 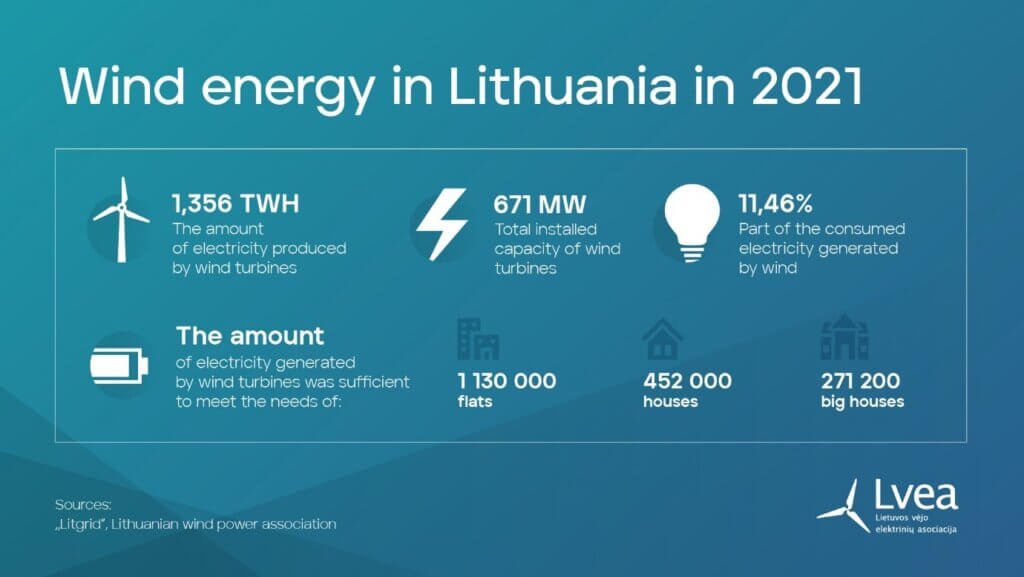 Last year, 17.4 GW of new wind power capacity was installed in Europe: 14 GW onshore and 3.4 GW offshore. This is 17.5% more wind power than in 2020 (11 GW) but 11% less than WindEurope’s forecast. However, new wind capacity in Europe is less than half of what Europe needs to build in a year if it is to meet its 2030 climate and energy targets.

According to WindEurope, the UK accounted for the most new wind power installations last year, with 2.7 GW (88% of which were offshore), followed by Sweden with 2.1 GW, Germany with 1.9 GW, Turkey with 1.4 GW and the Netherlands with 1.3 GW. These countries accounted for around 54% of the total number of new installations in Europe last year.

Last year, 3.3 GW of offshore wind capacity was installed in Europe. The United Kingdom had the highest number of offshore wind installations, with 2,317 MW, followed by Denmark with 605 MW and the Netherlands with 392 MW. They accounted for 19% of the total new wind capacity built in 2021. The average capacity of newly built turbines in 2021 was 4 MW for onshore and 8.5 MW for offshore wind farms.