There are currently over 300 wind farms of various sizes in Lithuania, with a total installed capacity of just over 730 megawatts (MW). Although there has been no significant growth in recent years, a major breakthrough is expected in the near future, as evidenced by both the plans of wind energy developers and the hundreds of millions of euros of business investment. According to the Lithuanian Wind Energy Association (LVEA), the total capacity of wind farms currently in various stages of development is over 2.7 gigawatts (GW).

“It should be noted that these parks are still in the development phase and will not necessarily be realised. However, if the plans were to come to fruition, it would be a significant growth – these capacities could generate around 9 terawatt hours (TWh) of electricity per year for Lithuania and meet around 60% of its electricity consumption,” calculates LVEA Acting Director Edgaras Maladauskas.

At least 35 wind farms exceeding 10 megawatts (MW) of installed capacity are currently under development in Lithuania. At least one third of them are expected to start generating electricity by 2024. The largest wind farms planned in terms of installed capacity include the 500 MW European Energy park in central and northern Lithuania, the 400 MW Windfarm Akmenė One planned in the Akmenė district, the 300 MW LT Energija park being developed by Renerga in the Pagėgiai district, and the 300 MW E wind park being developed by E Energija group in the Kelme district.

According to the Wind Europe 2021 report, compiled by Wind Europe, a European wind energy industry organisation, only 0.1 GW of new wind power plants were installed in Lithuania last year, bringing the total capacity of all wind power plants installed in the country to 668 megawatts (MW). Counting projects currently under development, the total installed capacity of wind farms is expected to reach 1.8 GW by 2025, while Lithuania’s target is to generate 7 GW from all renewable energy sources by 2030.

“Wind energy development in Lithuania has gained momentum, but it is still not sufficient. Electricity consumption is growing steadily, and earlier plans may no longer meet the increased demand. It must be taken into account that the aim is not only to replace fossil fuels with renewable energy sources, but also to meet the growing electrification of the automotive and industrial sectors. Electricity will also be needed for hydrogen production, which is being promoted by the EU,” commented Mr Maladauskas.

Today, the country has more than 1 GW of reserved grid capacity for new wind farms, indicating that wind energy will develop very rapidly in the near future. However, the market situation creates uncertainty as to whether all the plans of wind farm developers will be implemented in time.

Challenges can slow down development

Wind farm developers are currently facing both the high cost of building the farms, due to the rising prices of wind farms and the components they need, and logistical challenges, complicated by suspected fictitious grid reservations. The “Breakthrough Package” approved by the Seimas has also brought a number of innovations to the market, not all of which are welcomed by developers.

“Given the wind energy development that is expected in Europe, these challenges will only increase. Developers already have to wait 2 years for wind turbines to be commissioned, and as demand grows, production will inevitably have to grow too. At the moment, it is not really clear whether wind power producers are ready to increase production – there is already a shortage of raw materials and delays in supply,” says the LVEA CEO.

“Right now, raw materials are making wind turbines more expensive, but if supply is no longer able to meet the growing demand, this will have an impact on the final order price.”

While challenges to wind farm developers’ plans risk that wind energy targets will not be met on time, Maladauskas is realistic about the situation – delays can only be compensated by increasing the targets and speeding up the development of wind energy by making conditions as favourable as possible for it.

“We have certainly had cases in Lithuania where wind farm projects have not been completed. But nowadays, developers are much more experienced, the vast majority of them are developing very large projects, and the importance of energy independence is more important than ever for the country as a whole,” he says. 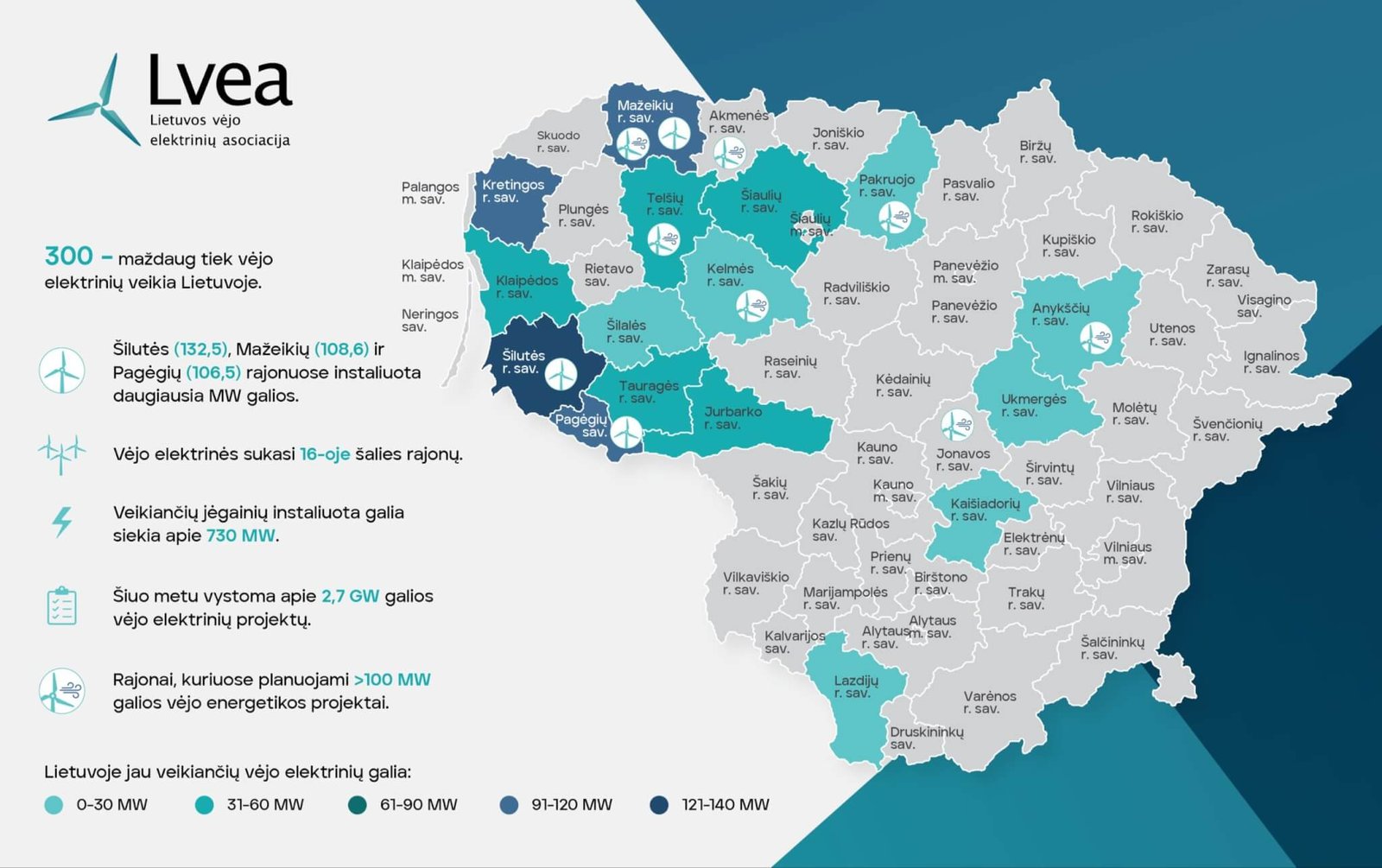 Benefits for regions and communities

The positive attitude towards wind farms in Lithuania is not only due to the wind farm developers, who are in constant contact with the residents and communities of the regions during the implementation of the projects and who answer all the questions, but also to the municipalities, which have already appreciated the benefits of wind energy for the regions. Currently, the districts of Šilutė (over 130 MW), Mažeikiai (over 108 MW), Pagėgiai (over 106 MW) and Kretinga (over 103 MW) have the highest total installed capacity of wind farms. If the wind park developers succeed in their plans, the districts of Akmenė, Kelme, Telšiai and Rokiškis will soon be added to this list.

According to Mindaugas Sinkevičius, President of the Lithuanian Municipalities Association (LMA) and Mayor of Jonava District, the country’s municipalities are willing to support wind energy development for several reasons. “Aware of the challenges posed by the geopolitical context and as part of their efforts to change the prospects for climate change, municipalities see the development of renewable resources as an important part of the green course. This is all the more so as wind energy in municipalities offers opportunities to live and work more sustainably, both for the public services sector and for the population,” he says.

When assessing the development of wind energy in the regions, it is important to take into account the specificities of the territories – not all municipalities have natural conditions favourable to wind farms: “The possibility of building wind farms in some areas is limited by forest cover, distance from residential and protected areas, or by the prevailing wind speeds in those areas.”

“The development of solar and especially wind farms in Jonava District has accelerated in recent years. Today, large wind farms are springing up in Žeimiai municipality. It is welcome that wind farm developers entering the Žeimiai municipality are not only contributing taxes to the district budget, but also volunteering to directly support and financially contribute to various local community initiatives and projects in the municipality,” says Mr Sinkevičius.

According to the annual report of wind energy experts Wind Europe, in 2021, EU countries will have invested €41 billion in new wind farms. Lithuania was one of the most invested countries, investing a record €0.4 billion in wind energy projects last year.

“By developing wind energy, we are also contributing to the development of Lithuania’s regions, where the investment we attract helps to create new jobs, clean up the environment and meet the needs of communities. This is just as important as the country’s energy independence,” said LVEA Acting Director E. Maladauskas.